Other articles by glit 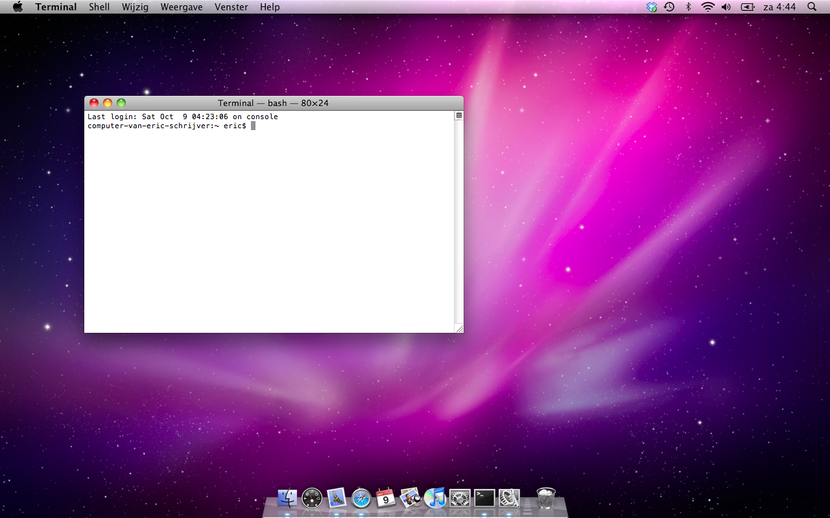 Glit here. So maybe you read bnf’s latest article, and you can not make chocolate out of it. The little program he writes, is a script that runs on the command line . You may have never used the command line before. You might not even want to. But I’m here to tell you it’s a smart move.

Imagine you’re an art student. And you just bought an expensive aluminium computer, because that’s part of the deal of being an art student today. What programs are you planning to run on it? Photoshop, Safari—Illustrator and inDesign maybe?

You couldn’t tell by the glossy graphics, but your Mac runs actually quite an old fashioned system, called Unix. Unix has been around since like forever. Or at least the 1970ies. Unix used to run on big computers in universities and enterprises, but in Mac Os X it has now found it’s way to personal computers.

Because Unix used to be the system that computer scientists and system administrators would run, almost all of the nifty programming tools have been developed for Unix. Your mac comes preinstalled with all the major programming languages: Python, Ruby, Perl, PHP. It comes with the webserver that runs many of the websites on the internet: Apache. And because it is a Unix system, you can easily expand with all the open source software that is being written today.

So here’s a sweet deal: your shiny expensive computer comes with a lot of programs for free, and you didn’t even know about it. Plus, you can tap into all the open source development that is being done right now. So whenever someone writes a new creative, clever or useful open source software tool, you can get that for free too! A whole new world to take in.

Now here’s the catch. Computer programmers and system administrators have a culture all of their own. One of the defining characteristics is, within this culture, graphical user interfaces like your Mac’s windows and buttons are not seen as the easiest way to deal with a program. Rather, you are expected to deal with your program through a Terminal. This is a window in which you type commands. Just like in DOS, for those of you who have used a computer before 1995.

So to benefit from the culture of open source and programming, you have to learn how to use the terminal to run your programs. Other than that, you have to learn to use a program called a ‘package manager’ to easily install new programs. My colleagues are going to learn you both of these things. And to achieve the latter, we’re also going to install a compiler—having a compiler around is an integral part of this lifestyle.

I’ll hand it back to bnf to introduce you to the terminal!. Subsequently, tellyou tackles installing new unix software in I like tight pants and installing compilers.

I was an art student, and my first programming language was Macro-11 Assembler, on PDP 11/34

This is the first time I've EVER found myself interested in digging into the Mac world. Cool stuff, thanks for drilling into it. I was a commerce student, and my first programming languages were PL1 on punch cards, COBOL on a dual-floppy pc with half-hour compile times, and Assembler on the PDP-11.

I like very so much this system unix :D

and if you learn it real good, we'll show you how to get rid of that goofy Mac GUI and use UNIX full-time. Then you'll realize you could have installed Linux over an old IBM compatible for about 10% of the cost.... C'est La vie!

And for those of us who want both the goofy Mac GUI and the underlying UNIX? :p

It’s quite clever actually, the article presents it as if Unix is yet another reason to feel happy you bought a Mac, which will appeal to the readers, as the art students are probably in need of more justification for this costly purchase. But at the same time, it talks of being more intimate and experimental with your computer, which suggests an attitude that is not content with the status quo of the Mac as a prerequisite for creative work… Learning Unix commands goes a long way to creating such an attitude; your skills now also apply on web servers and linux boxes.

My colleagues are going to teach you both of these things. Not learn you.

I actually think Glit said "learn you" on purpose. He was being funny and taking a jab at the Mac elitists.

Thank you for your very positive assessment of my grammar skills.

I pretty sure that exists more than 4 major languages :)) "Your mac comes preinstalled with all the major programming languages: Python, Ruby, Perl, PHP"